Shark Tank Vietnam - Cellist Dinh Hoai Xuan: On the other side 2 billion VND invested from Shark Hung, the brave shark "pioneer"!
A few days since the broadcast of SharkTank Vietnam season 4, episode 9 has been abuzz. The artist and founder of our Cello Fundamento raised capital to develop an international chain of classical concerts and concerts.
As everyone has seen. The result has closed the deal. Receive 2 billion "investment" from Shark Hung for the planned CF6 program in May 2022 and in return, Shark Hung will receive 70% of the program's profit if it is profitable and all of that profit will be contributed. into the establishment of a legal entity for CF to operate more methodically. If there is a loss, the artist will have to return the original 2 billion VND.
And that's also the source of a lot of discussions. Praise yes, criticize yes, but it seems that the faction throws more stones at Shark Hung, and at the same time feels sorry for artists, who only know music, do not know the economy, are disadvantaged.
As a member of the CF team, as a companion in many CF works with artists, I also have a lot of information from many dimensions to understand better. 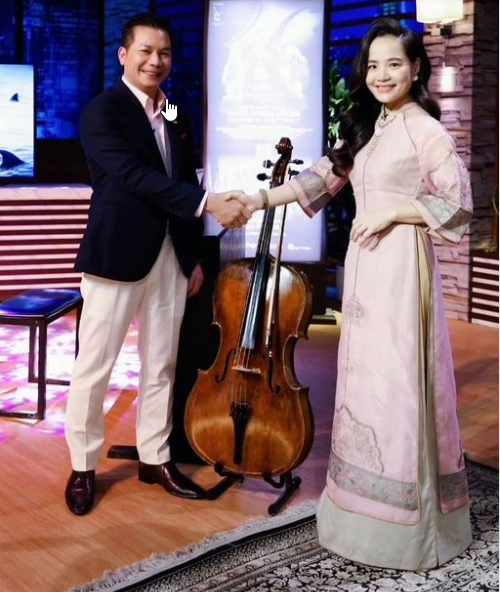 Actually, when the artist announced the deal closing like above, I was also quite surprised, but I immediately reassured the artist and the team to simply consider this as a gift from a huge fan named Hung to CF, an amount of 2 billion VND to operate, no interest rate (calculating a savings deposit of 6%/year, it can also be converted to 120 million VND).
Have you had any hardcore fans in your CF give you a gift of 120 million VND to contribute to making music?
The Vietnamese music market is complex, demanding, and fiercely competitive to attract audiences. Classical academic music in Vietnam is less and less standing. Sometimes I even wonder if it's enough to call it a market? If not, will the profit - loss of economic business have anything to discuss?
So, with the above "gift" of Shark Hung, our artist and CF team really appreciate and thank him rather than worrying about paying him 70% of that not-worth table.
Back to our "national" artist Dinh Hoai Xuan, who has always struggled with his love of academic music and his cello. Xuan is one of the few classical artists who have been labeled "backward thinking".
Instead of staying in peace and performing as a Soloist in the West, serving Western audiences for income and prestige. At the same time, he received a role as a music teacher in a US university with a stable income of up to 5000~6000 USD/month. She refused and returned to Vietnam, "turning against the way of thinking of the majority" to practice, strive, and take advantage of every possible opportunity to spread her love of classical music, bring a The spiritual value of this academic music is not only present but also in the future for Vietnam.
Not a terrible family, not even anyone to support, only a strong love for the cello, always working hard, diligently studying and practicing until the end to reach the dream of becoming a Soloist.
It must be bravery, and necessary quality to become a "pioneer". Through observing and sharing experiences, Xuan is the one who has been standing in the ranks of pioneers but still has the gentleness and gentleness of Hue.
1) Xuan is the first female doctor to perform Cello in Vietnam. The press has also written a lot.
2) Xuan is the first female classical music artist to digitize and release classical music albums on 24 digital music platforms and distribute them to 240 countries and regions.
3) To this day, it is probably also the first classical artist who dares to declare "starting a business" to organize international performances in Vietnam. Perhaps also the first classical music start-up on SharkTank Vietnam from the first season until now?
Shark Hung, perhaps a connoisseur of predatory fish, soon recognized that quality from the artist and founder of this particular CF, and wanted to support a "pioneer" like himself? This quick nose is "hearing" enough to smell from afar, surpassing short-term business numbers, and the "artist" in Shark is just adventurous enough to feel, "catch the waves" to be USP ( Unique Selling Point) only pioneers who think against the crowd.
As usual, the sharks may sometimes "try to show" their business shrewdness on a TV Gameshow. But today, Shark Hung has crossed that normal data boundary. However, still being stoned as "bullying" artists???
From this analysis, it can be clearly seen that Shark Hung is really the one who helped and strengthened the confidence of the artist and the CF team to continue on his path. Artist and CF team up to now, even though we have not had time to promote the deal to go to DD right away, we are really grateful and promise to do our best to not disappoint Shark's kindness.
Finally, about everyone talking about successful SharkTank broadcast, it is a good PR for classical music in general and the international classical concert program Cello Fundamento No. 6 in particular. Every start-up, too, has PR in mind when participating in the program. CF, while uniquely a classical music "start-up", is no exception. It turned out that, coming to the program, many people were interested (for or against, it doesn't matter) and the majority reflected an optimistic view, expecting the country's economic growth as well. hope to help this scholarly spiritual dish get a more worthy position. CF itself, in addition to creating an international classical music playground in Vietnam, also invests a lot in composing and arranging Vietnamese folk songs for Cello and the symphony orchestra to renew and contribute to its identity. Vietnam into the treasure of international classical music. CF holds the copyright of no less than 10 folk songs that have been compiled and performed many times not only in Vietnam and internationally, raising our own integration into the ocean in this academic field.
Just like Shark Hung observed and mentioned in a recent sharing, these folk songs converted to classical are also a reasonable "guide" for the Vietnamese audience to enter the musical path. academic. For some occasions, I will write carefully and share more about CF's journey to create value from this angle.
I the end, the artist and CF are still the same from the beginning, sharing the following philosophy on the website cellofundamento.org by artist: " MUSIC IS ALWAYS THERE WHERE A LOVING HEART IS"
In the past few days, the deep concern and sharing of opinions of readers and the online community with the female artist - Cellist Dinh Hoai Xuan and her musical path "upstream of thought" is really a clear embodiment of love and respect from everyone.
Thank you very much. Love!
Cello Fundamento