Artist Dinh Hoai Xuan and the story "bewitched by the Cello"

Used to make a billion-dollar MV when there was only... 4 million

Artist Dinh Hoai Xuan can talk passionately for hours about the cello without getting bored. Listening to her story, few people thought that this small Quang Binh woman would take such a risk. Artists are inherently improvised, just do it and then calculate it later, but as reckless as Dinh Hoai Xuan is, it really makes people… panic. With only 4 million in hand, even making a humbly CD is also called "brave". On the other hand, artist Dinh Hoai Xuan made a big deal with the filming of a cinematic "Huong ve Ha Noi" MV, which cost her up to 1 billion VND. She mobilized a crew of 130 people, in which the orchestra and choir were up to 80 people, filmed in 4K quality and the MV was released in theaters. It is thanks to "playing big" that when graduating from the National Academy of Music, artist Dinh Hoai Xuan overcame 3 very heavy foreign candidates to get a full scholarship to perform in Romania.

Artist Dinh Hoai Xuan said: "Perhaps my "risky blood" is natural. When I was young, I passed ballet but then chose the piano. Once I saw the cello, I felt like I was "abandoned". charm" because it's so beautiful, the deep timbre is very special. At that time, I just thought simply, it's so beautiful, if I sit in it, it will also be beautiful.” 22 years of studying, she made the guitar and his cello sound became more beautiful, all thanks to a "crazy love" for classical music. 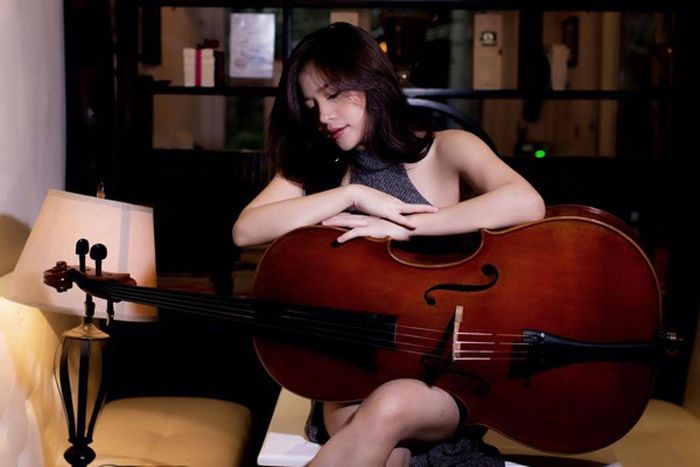 Dinh Hoai Xuan is sexy with the cello.

She confided: “People tell me to take risks, but I think it's because I trust my intuition because my desire to do, to live with the cello is too strong in me. Sometimes I put myself under money pressure, "bet" my reputation so that I can't stop. Like when making the MV "Towards Hanoi", I only had one thought that I had to do it, and I didn't need to know-how. I just went to the show to spend every dollar of remuneration, and mobilized relatives and friends to help but still couldn't get enough, because the money at that time was too big for a student like me. My family was not rich, my father was an army colonel but passed away, my mother was a teacher, the money was all for me to make MV.

So I accepted the loan, when I was too secretive, I also accepted a "hot" loan with a high-interest rate because there was no other way. Seeing that I made such a grand MV, everyone thought that I had a giant behind, otherwise, how could I dare to play so big. To this day, I still keep a book of debts, which is so entangled that if I lose it, I will regret it very much, because it is a record of my whole hard-working process at that time. Fortunately, I have "supporting nobles", a little bit for each person, although it is small, it is a great motivation for me to do big things. It gives me a great spirit, that I have to live, study, perform to make these people proud of me.” 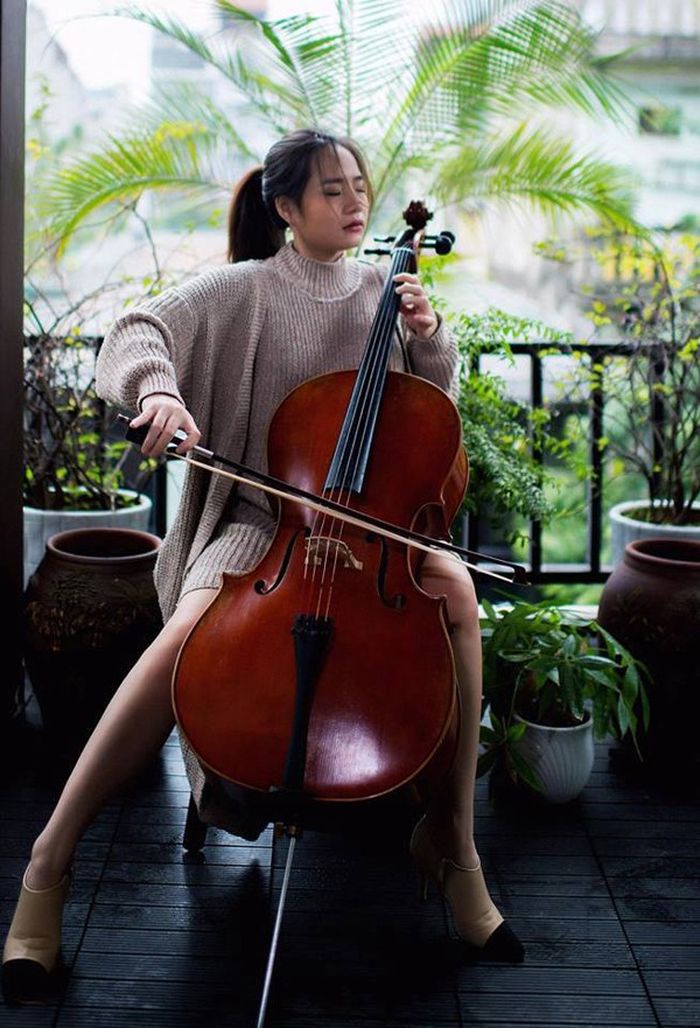 Dinh Hoai Xuan has a special affection for the cello.

Many people also doubt that classical music artists have to take care of every penny and eat every meal like that, the sound of the piano is difficult to keep pure. Artist Dinh Hoai Xuan knows, but she looks at it in a positive way, that it is those life stories that will make her more emotional, the music more compassionate. As his person is, his music is like that, so artist Dinh Hoai Xuan always keeps his passion, enthusiasm, and pure love in life. The difficulty is only economic, but the music still has to come from the heart. 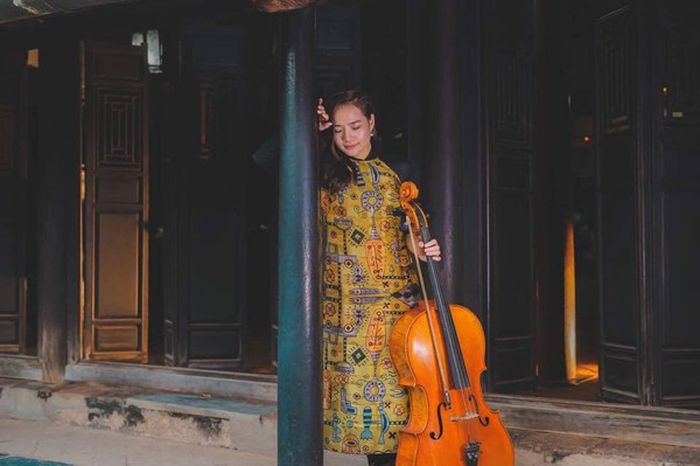 Dinh Hoai Xuan always keeps her passion, enthusiasm, and purest love in life. The difficulty is only economic, but the music still has to come from the heart.

After Trinh's elaborate music MV "Song ve dau" and MV "Huong ve Ha Noi" created a strong foothold in the market, artist Dinh Hoai Xuan suddenly studied abroad for 4 years in Romania. Unlike when in Vietnam, she studied and worked, in Romania, she devoted all her time and breath to the cello. Artist Dinh Hoai Xuan said: “During my time in Rumaini, I only knew 3 roads: the way to the theater to practice and perform; a way to school; the way to the supermarket to buy food”. 4 years of touching one of the cradles of the music industry have made the sound of artist Dinh Hoai Xuan more skillful and deeper. She also learned a lot from great artists, through performances in the US, Spain, Italy, Belgium, Greece, and theaters in Romania.

After 4 years, artist Dinh Hoai Xuan has a lot of practical knowledge to write a thesis to defend her doctoral thesis, thanks to being the founder of the Cello Fundamento performance series in its third season. From the place where the concert is only 1-2 billion VND, Cello Fundamento 3 performed in December this year has an international scale, with a scale of up to 100 people from the Romanian symphony orchestra. In addition to his solo role, artist Dinh Hoai Xuan also "carried" another difficult part, finding funding. Although it was difficult, the happiest thing for her right now is that she has achieved her dream of playing solo, alongside famous cellists of the world. 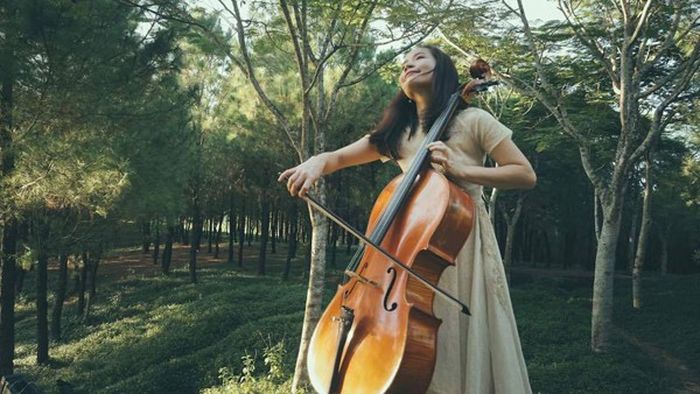 She is the founder of the Cello Fundamento show series already in its third season.

To make such a big cello program as it is today, artist Dinh Hoai Xuan said, she had to sacrifice her personal joys. “Other women who have husbands and children, I only have music. I have to sacrifice many other things like love, of course, because of my own difficulties. Cello to me is my whole life, but I will spread that passion to young people, so that in the not too distant future, Vietnam will have famous cellists,” artist Dinh Hoai Xuan said with overflowing hope flooded in the eyes.